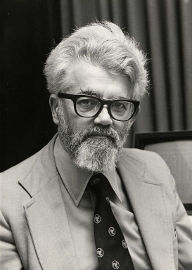 John McCarthy, who died last week at the age of 84, was one of the true giants of computer science. Most remarkable about his contributions are their diversity, their depth, and how they span both theory and practice.

To talk about him it is necessary first to dispel an unjustly negative connotation. McCarthy was one of the founders of the discipline of artificial intelligence, its most forceful advocate and the inventor of its very name. In the “AI Winter” episode of the late 1970s and 1980s, that name suffered some disrepute as a result of a scathing report by James Lighthill blaming AI researchers for over-promising. In fact the promoters of AI may not have delivered exactly what they announced (who can accurately predict science?); but what they delivered is astounding. Many breakthroughs in computer science, both in theory (advances in lambda calculus and the theory of computation) and in the practice of programming (garbage collection, functional programming languages), can directly be traced to work in AI. Part of the problem is a phenomenon that I heard John McCarthy himself describe:  “As soon as it works, no one calls it AI any more.” Automatic garbage collection was once advanced artificial intelligence; now it is just an algorithm that makes sure my smartphone does not freeze up. In a different field, we have become used to computers routinely beating chess champions, a feat that critics of AI once deemed unthinkable.

The worst over-promises came not from researchers in the field such as McCarthy, who understood the difficulties, but from people like Herbert Simon, more of a philosopher, who in 1965 wrote that “machines will be capable, within twenty years, of doing any work a man can do.” McCarthy’s own best-known over-promise was to take up David Levy on his 1968 bet that no computer would be able to beat him within ten years. But McCarthy was only mistaken in under-estimating the time span: Deep Blue eventually proved him right.

The word that comes most naturally to mind when thinking about McCarthy is "brilliant." He belonged to that category of scientists who produce the fundamental insights before anyone else, even if they do not always have the patience to finalize the details. The breathtaking paper that introduced Lisp [1] is labeled "Part 1"; there was never a "Part 2." (Of course we have a celebrated example in computer science, this one from a famously meticulous author, of a seven-volume treaty which never materialized in full.) It was imprudent to announce a second part, but the first was enough to create a whole new school of programming. The Lisp 1.5 manual [2], published in 1962, was another masterpiece; as early as page 13 it introduces — an unbelievable feat, especially considering that the program takes hardly more than half a page — an interpreter for the language being defined, written in that very language! The more recent reader can only experience here the kind of visceral, poignant and inextinguishable jealously that overwhelms us the first time we realize that we will never be able to attend the première of Don Giovanni at the Estates Theater in Prague on 29 October, 1787 (exactly 224 years ago yesterday — did you remember to celebrate?). What may have been the reaction of someone in "Data Processing," such as it was in 1962, suddenly coming across such a language manual?

These years, 1959-1963, will remain as McCarthy's Anni Mirabiles. 1961 and 1962 saw the publication of two visionary papers [3, 4] which started the road to modern program verification (and where with the benefit of hindsight it seems that he came remarkably close to denotational semantics). In [4] he wrote

Instead of debugging a program, one should prove that it meets its specifications, and this proof should be checked by a computer program. For this to be possible, formal systems are required in which it is easy to write proofs. There is a good prospect of doing this, because we can require the computer to do much more work in checking each step than a human is willing to do. Therefore, the steps can be bigger than with present formal systems.

Words both precise and prophetic. The conclusion of [3] reads:

It is reasonable to hope that the relationship between computation and mathematical logic will be as fruitful in the next century as that between analysis and physics in the last. The development of this relationship demands a concern for both applications and for mathematical elegance.

"A concern for both applications and mathematical elegance" is an apt characterization of McCarthy’s own work. When he was not busy designing Lisp, inventing the notion of meta-circular interpreter and developing the mathematical basis of programming, he was building the Lisp garbage collector and proposing the concept of time-sharing. He also played, again in the same period, a significant role in another milestone development, Algol 60 — yet another sign of his intellectual openness and versatility, since Algol is (in spite of the presence of recursion, which McCarthy championed) an imperative language at the antipodes of Lisp.

McCarthy was in the 1960s and 70s the head of the Artificial Intelligence Laboratory at Stanford. For some reason the Stanford AI Lab has not become as legendary as Xerox PARC, but it was also the home to early versions of  revolutionary technologies that have now become commonplace. Email, which hardly anyone outside of the community had heard about, was already the normal way of communicating, whether with a coworker next door or with a researcher at MIT; the Internet was taken for granted; everyone was using graphical displays and full-screen user interfaces; outside, robots were playing volley-ball (not very successfully, it must be said); the vending machines took no coins, but you entered your login name and received a bill at the end of the month, a setup which never failed to astonish visitors; papers were printed with sophisticated fonts on a laser printer (I remember a whole group reading the successive pages of Marvin Minsky’s  frames paper [5] directly on the lab’s XGP, Xerox Graphics Printer, as  they were coming out, one by one, straight from MIT). Arthur Samuel was perfecting his checkers program. Those who were not programming in Lisp were hooked to SAIL, "Stanford Artificial Intelligence Language," an amazing design which among other insights convinced me once and for all that one cannot seriously deal with data structures without the benefit of an automatic serialization mechanism. The building itself, improbably set up amid the pastures of the Santa Cruz foothills, was razed in the eighties and the lab moved to the main campus, but the spirit of these early years lives on.

McCarthy ran the laboratory in an open and almost debonair way; he was a legend and somewhat intimidating, but never arrogant and in fact remarkably approachable. I took the Lisp course from him; in my second or third week at Stanford, I raised my hand and with the unflappable assurance of the fully ignorant slowly asked a long question: "In all the recursive function definitions that you have shown so far, termination was obvious because there is some 'n' that decreases for every recursive call, and we treat the case 'n = 0' or 'n = 1' in a special, non-recursive way. But things won't always be so simple. Is there some kind of grammatical criterion on Lisp programs that we could use to ascertain whether a recursive definition will always lead to a terminating computation?" There was a collective gasp from the older graduate students in the audience, amazed that a greenhorn would have the audacity to interrupt the course with such an incompetent query. But instead of dismissing me, McCarthy proceeded, with a smile, to explain the basics of undecidability. He had the same attitude in the many seminars that he taught, often on topics straddling computer science and philosophy, in a Socratic style where every opinion was welcome and no one was above criticism.

He also had a facetious side. At the end of a talk by McCarthy at SRI, Tony Hoare, who was visiting for a few days, asked a question; McCarthy immediately rejoined that he had expected that question, summoned to the stage a guitar-carrying researcher from the AI Lab, and proceeded with the answer in the form of a prepared song.

The progress of science and technology is a collective effort; it takes many people to turn new insights into everyday reality. The insights themselves come from a few individuals, a handful in every generation. McCarthy was one of these undisputed pioneers.

[4] John McCarthy: Towards a Mathematical Science of Computation, in IFIP Congress 1962, pages 21-28, available in various places on the Web, e.g. here.