The finals started Wednesday morning, after hundreds of anxious contestants filed into the Rushmore Plaza Arena, sat down at their workstations, and waited for the contest to begin. Two giant projector screens were facing the stands, showing the remaining time, the score of each team, how many solutions to problems have been submitted, and the languages the contestants use. A giant television showed which teams problems were in the queue to be judged.

Spectators filled the stands, many wearing T-shirts supporting teams from faraway places. Some spectators came from across the globe to support their team.

There were 12 programming problems and 12 groups of colored balloons, with each balloon corresponding to a problem. When a team solved a problem, a volunteer would tie a balloon to their workstation. As the contest progressed, the arena was a sea of colorful balloons. 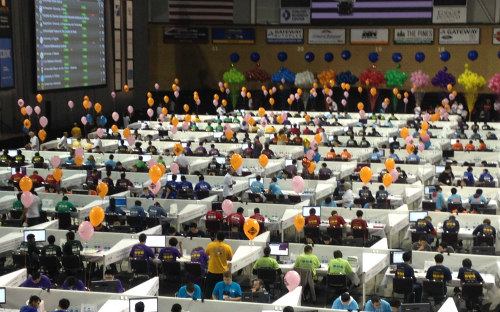 Several teams battled it out for first place for much of the competition, with each team barely able to hang on to the top spot for long. Seoul National University took the lead initially, but Tsinghua University, the University of Warsaw, and St. Petersburg ITMO University eventually surpassed Seoul. With only an hour remaining in the competition, the scoreboard froze. That made it impossible to know how the teams are doing until the end of the competition. Throughout, 891 solutions were submitted to the judges.

Competitors and spectators didn't see where the teams place until the 2017 ICPC World Finals Closing Ceremony.

During the ceremony, it was announced that the 2018 ICPC World Finals would be held in Beijing, China, hosted by Peking University. Song Gao, vice president of Peking University, congratulated the competitors and provided background information on his prestigious university.

Bill Poucher, ICPC executive director, congratulated the coaches for their work with an incredible group of students. "You have some of the brightest students the world here — and they just caused a huge shortage of balloons in Rapid City," he joked. "I don't think you could go downtown and get a balloon now."

"When I look at those massive balloons, I think of the first programming contest I was a co-coach on. So far back in the past, maybe 1976, and we had six hours back then and four team members," Poucher said. "The first correct submission for a problem occurred four hours after the contest started. It is a little embarrassing to tell that story but we were great, we could solve problems faster than anybody else. But you had to deal with key punch machines and key punch operators." 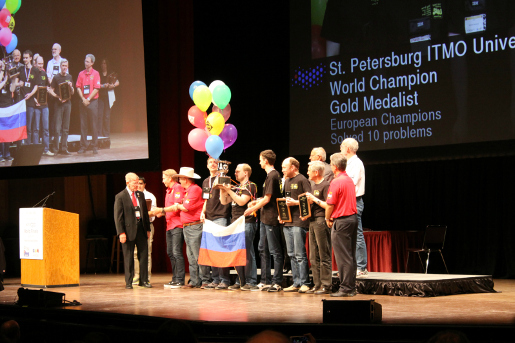 After the winners were announced, the event ended and students boarded buses to head to a party at the Crazy Horse Memorial. Competitors would get an opportunity to learn about the history of the mountain monument, eat local foods, and watch a large laser light show.

The 2017 ACM ICPC winners and their medals are:

Kelsey Sinclair, a student at South Dakota School of Mines and Technology, is on assignment for the [email protected]