With a population density of 2,642 persons/km2 and nearly thirty-six million residents in the Tokyo-metropolitan area, it's no surprise that the Tokyo transportation network is a complex system of interconnecting tracks, stations, turnstyles and electronics.  What is surprising, however, is the near-flawless efficiency with which it operates on a daily basis. 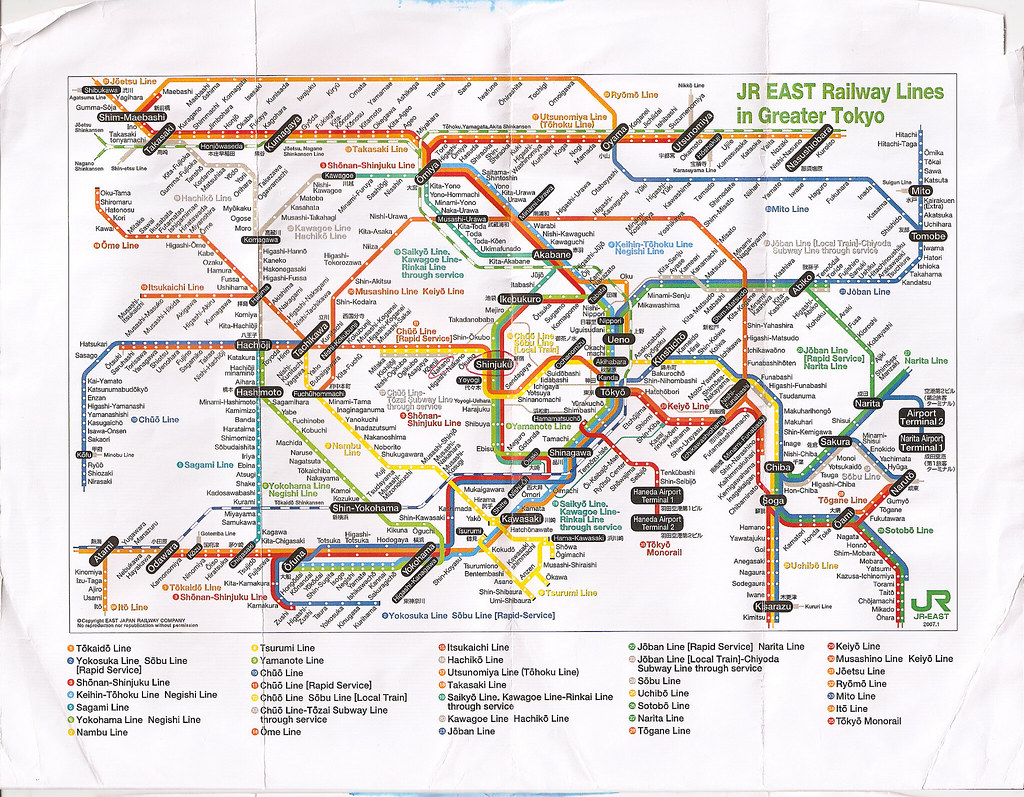 The route map above details the interconnectivity of the JR East railway network, whose yearly ridership is just a hair over six billion.  What's more, lines with sections inside the Tokyo metropolitan area consist of over 7,500km of steel tracks, responsible for 130.5 billion passenger kilometers annually. Astoundingly, JR East is just one of many train systems in the Tokyo area railway network , an ecology that includes the Tokyo Metro subway and several medium- and long-distance high-speed lines connecting Tokyo with other prefectures.

While details on the mechanisms underlying the functioning of these systems are hard to come by, their effects are remarkable indeed.  A majority of the time passengers are able to transition seamlessly between carriers, with not a mote of trouble paying the by-distance fare for a JR Ticket at a Tokyo Metro station kiosk.  Outside of a quick ticket swipe at the turnstyle, the system responsible for tracking passenger exchanges and accounting for the associated costs is completely transparent to the end user.

In spite of all its complexity, the train system operates with an elegance and precision that is unmatched by any other in the world.  In 2003 the high-speed Shinkansen railway had an average arrival time within six seconds of the scheduled arrival time. Moreover, in seven weeks of daily use I've only once seen a train delayed, and though the railway system operates with the precision of a fine watch, it is clearly a highly non-linear system. Despite what would seem to be an exceptional vulnerability to failure cascades, wherein the effects of  an animal, minor earthquake, car accident or derailing ripple through the network and leads to a city-wide transportation shutdown (and devastating economic impact), the system appears to be highly resillient.  During my delay I was forced to wait at the station no longer than twenty minutes, and the LED timecharts were corrected within another forty.  Unfortunately, though it would be a unique pleasure to study the algorithms in place for mitigating the effects of network damage, I suspect they are considered highly valuable intellectual property.

While a well-designed system is as transparent to the user as possible, looking at the map above it's staggering to contemplate the scale involved, realizing that each edge in this rat's nest of a network represents all of the physical infrastructure and overhead associated with a running a train line through the heart of the most populous city on the planet.

It kind of puts the hassle of installing printer drivers in perspective.

Images in this article are licenced under Creative Commons Share-a-Like 3.0.