K12 computer science Education (CSed) is an international challenge with different countries engaging in diverse strategies to reach systemic impact by broadening participation among students, teachers and the general population. For instance, the CS4All9 initiative in the U.S. and the Computing at School4 movement in the U.K. have scaled up CSed remarkably. While large successes with these kinds of initiatives have resulted in significant impact, it remains unclear how early impact3 becomes truly systemic. The main challenge preventing K12 CSed to advance from teachers who are technology enthusiasts to pragmatists is perhaps best characterized by Crossing the Chasm,5 a notion anchored in the diffusion of innovation literature. This chasm appears to exist for CSed. It suggests it is difficult to move beyond early adopters (Figure 1, red and orange stages) of a new idea, such as K12 CSed, to the early majority (Figure 1, green stage). Switzerland, a highly affluent, but in terms of K12 CSed somewhat conservative country, is radically shifting its strategy to cross this chasm by introducing mandatory pre-service teacher computer science education starting at the elementary school level.

Three fundamental CSed stages, captured in Figure 1, are characterized by permutations of self-selected/all and students/teachers combinations. It took approximately 20 years to transition through these stages. Each stage is described here from a more general CSed perspective as well as my personal perspective. 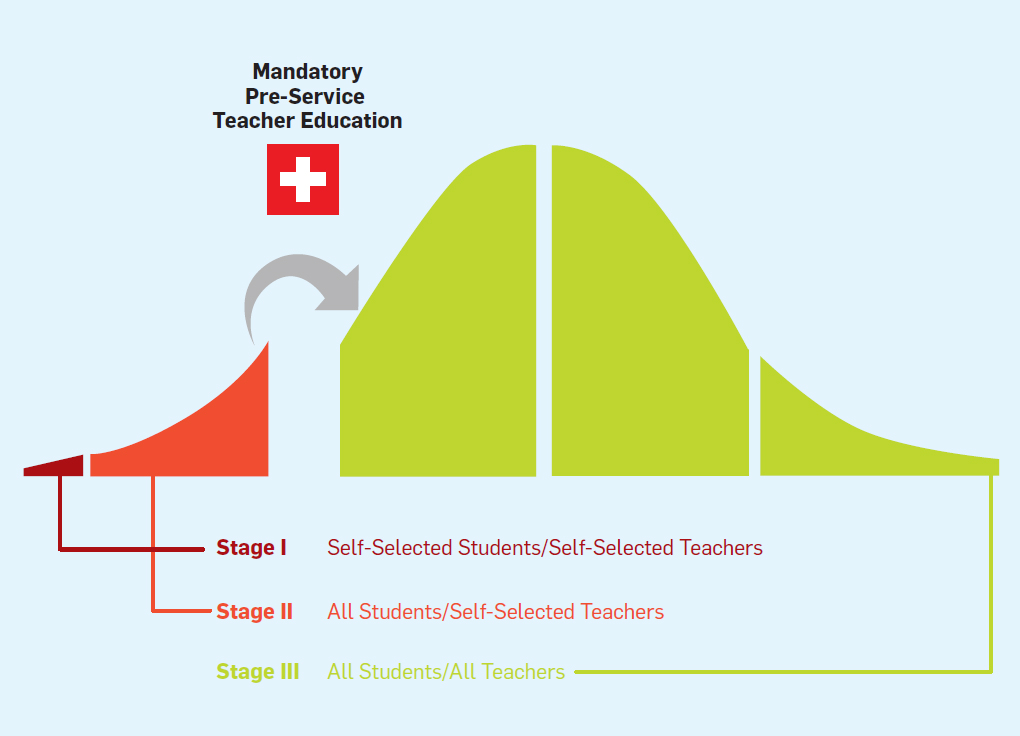 Stage I: The "Friday Afternoon Computer Club" Stage (Self-Selected Students/Self-Selected Teachers): Stage I focused mostly on the "right" tools. In the 1990s the overall negative perception of programming by children, best described as "hard and boring,"7 suggested cognitive as well as affective challenges. Being constantly just one semicolon away from total disaster with traditional programming languages such as C or Pascal, is an example of syntax being a cognitive challenge. But even with the presence of early educational programming languages, such as Logo and BASIC, programming in schools was typically marginalized into after-school contexts such as Friday afternoon clubs. These clubs, in turn, attracted only the usual suspects, that is, self-selected kids (mostly male) instructed by self-selected teachers (also mostly male). To make computing more relevant to schools it was crucial to focus less on tools supporting programming per se but to create tools to forge explicative ideas through computing, or as Papert started to call it, computational thinking.6

Stage II: The "Professional Development Movement" Stage (All Students/Self-Selected Teachers). Once computational thinking tools sufficiently addressed the cognitive and affective challenges dimensions of CSed, it was time to shift the research focus from tools to curricula and teacher professional development. Researchers started not only to design, and conduct teacher professional development but also to systematically evaluate its efficacy. The teachers attending were mostly self-selected, but in many cases the classes they would teach were aimed at all students and no longer limited to after-school contexts. Stage II started to reach a much broader audience than Stage I.

K12 computer science education does not have the intent of producing a fleet of programmers but on producing computational thinkers.

Stage III: The "Mandatory Pre-Service Teacher Education" Stage (All Students/All Teachers). Compelling curricula can spread through networks of excited CS teachers surprisingly quickly,2 but how will they cross the CSed chasm (Figure 1) and persuade more conservative audiences? If society truly believes computational thinking is an essential 21st-century skill, just like mathematical thinking, then it will have to shift to transformative mandatory practices reaching all pre-service teachers.

In 2013, I began leading a pilot project in Switzerland to explore systemic impact on K12 CSed through mandatory pre-service teacher education. This project engages all pre-service elementary school teachers at one of Switzerland's largest Schools of Education, PH FHNW, in CSed, through two mandatory CS courses. Other Swiss Schools of Education, e.g., the PHSZ, are offering similar mandatory CS courses. The new Swiss Lehrplan 21, a national curriculum reaching the 21 German-speaking states out of all 26 states in Switzerland, enabled this kind of transformational practice because it mandates K12 CSed. The transformative nature hinges on the possibility for students to fail becoming an elementary teacher based on failing a mandatory CS course. This unparalleled kind of causality resulted in government intervention. Four years of negotiations, where the societal benefits of CS had to be explained to the Swiss Conference of Cantonal Ministers of Education, finally resulted in the accreditation of mandatory CS courses for elementary school teachers.

Conceptually, the Scalable Game Design Switzerland course is rooted in the Scalable Game Design framework developed at the University of Colorado8 but it had to go through radical transformation to deal with the different needs of a non-self-selected audience. Less than 1% of these pre-service teachers had programming experience. The expectations of teachers (75% women, 25% men) varied widely with many anticipating learning how to use Word or PowerPoint. Instead, just like the original course, this new course focused on computational thinking conveyed through game design and STEM simulation building. To make the course relevant to pre-service teachers, Scalable Game Design Switzerland had to be carefully aligned with the learning goals defined as competences in the Swiss Lehrplan 21.

On September 17, 2017, in four states, seven instructors began to teach 26 CS courses with approximately 25 pre-service teachers each. All 600+ pre-service teachers must take two courses: Introduction to Computer Science and Computer Science Didactics. This totals four credit hours, resulting in over 25,000 contact hours. The Introduction to Computer Science course, which finished in December 2017, was based on three core concepts. Each concept is described here and includes a brief description of our preliminary assessment:

The "scalable" aspect of the course worked well resulting in all pre-service teachers (students of the school of education) developing the necessary skills to program at least a basic game. Before the course, the acceptance of game design as learning strategy by teachers was one of our biggest concerns. Course satisfaction overall was high with many even mentioning in their course evaluation that they liked programming games. Figure 2 shows sample games and simulations produced by teachers such as 1980s-era arcade-style 2D games (Donkey Kong), puzzle games (Tetris), educational simulation games (honey bee pollination), 3D indoor games, and 3D outdoor games. To design these games students had to engage in an iterative computational thinking process.7 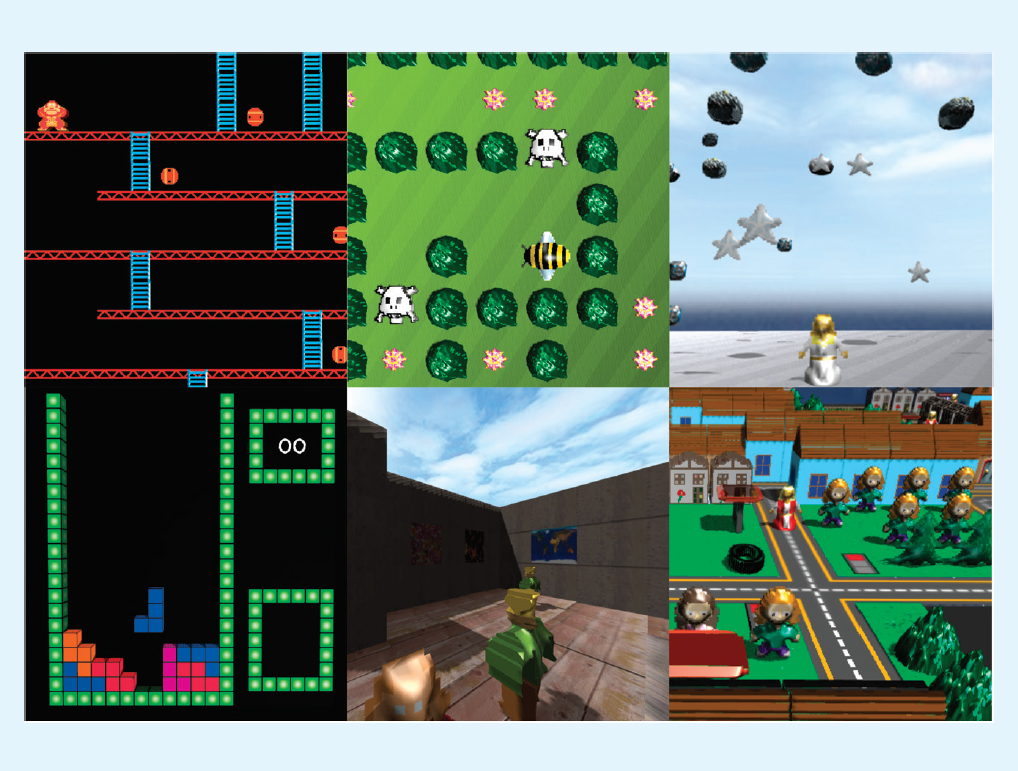 There was a huge shift of perception regarding pre-service teachers' ability to program. Before the course essentially nobody had done any kind of programming nor did they think programming was particularly relevant to K12 education. At the end of the first course all 600+ pre-service teachers had created and programmed multiple games and participated in multi week game programming group projects. Everybody had gone beyond the minimal basics of programming, for instance by programming collaborate ghosts in a Pac-Man like game. Also, learning was not reduced to CS in isolation but included uses of computation in other subject areas such math, music, art, and social sciences.

In spite of its density, most students really enjoyed this course structure. Students took particular pleasure in the Computer Science Principles ideas that were either evidently relevant to their lives such as the Internet, or conveyed through engaging activities such as a CS unplugged role play of people acting as bubbles in bubble sort to understand the notion of an algorithm.

The preliminary evaluation of the first part of the course (Introduction to Computer Science) suggests a shift in audience from self-selected in-service teachers to all pre-service teachers may not be as difficult as anticipated. However, to actually assess if we can teach these pre-service teachers to teach computational thinking to their students will not only require us to conduct the second part of the course (Computer Science Didactics) but also much more time to observe practical impact. We have an approach that has been successful in the past, and we have a broad, transformative experiment that could scale to an entire country. We have confidence that this approach will allow us to cross the CSed chasm.

1. Basawapatna, A., Repenning, A., Koh, K.H., and Nickerson, H. The zones of proximal flow: Guiding students through a space of computational thinking skills and challenges. In Proceedings of the International Computing Education Research (ICER 2013), San Diego, CA, USA, 2013.

2. Bradshaw. P. and Woollard, J. Computing at school: An emergent community of practice for a re-emergent subject. In Proceedings of the International Conference on ICT in Education, Rhodes, Greece, 2012.

6. Papert, S. An exploration in the space of mathematics educations. International Journal of Computers for Mathematical Learning 1 (1996), 95123.

7. Repenning, A. Moving beyond syntax: Lessons from 20 years of blocks programing in AgentSheets. Journal of Visual Languages and Sentient Systems 3, (2017), 6889.

a. AgentCubes online is a 3D computational thinking tool with more than one million student projects created in 2017 in over 180 countries.

When it comes to K-12 CS education, this viewpoint focuses on the teacher and not the student. The assumption is made is that if all teachers get quality pre-service CS training, then that will translate automatically to all K-12 students getting a CS education. The tool called AgentCubes, created by the author of the article, is promoted as a way for teachers and students to learn computational thinking. From a quick look at the AgentCubes web site, it is not accessible to screen reader users. As a result it is probably useless for teaching blind students. With any article that promotes a particular tool for K-12 education, there should be a note about its limitations. The term "all students" is not fully realized in the story presented in this article.

as you knowwe spoke many times at NSF meetings, and I emailed you information about our accessible versions of tools (would have been nice to get some email response from you btw)we do have options for students who need screen readers. AgentSheets, the first drag and drop programming environment of its kind, going back to 1995, already, and still, includes screen reading explaining programs using text-to-speech. AgentSheets, 3D aside, is compatible with AgentCubes and can be used as alternative. Years before other drag and drop programming tools even appeared we already had included accessibility features in AgentSheets. And this includes not just screen reading but also keyboard and mouse based programming composition avoiding the need for drag and drop. I know that you know that drag and drop gestures can be difficult for some users. You can find some discussion of these accessibility features in one of the papers cited in the article.

A. Repenning, "Moving Beyond Syntax: Lessons from 20 Years of Blocks Programing in AgentSheets," Journal of Visual Languages and Sentient Systems, vol. 3, pp. 68-89, 2017.