Since research in synthetic biology began nearly two decades ago, the field has expanded beyond its original mandate of using engineering principles to study and manipulate cells. Today, scientists are building biological computers and DNA-based robots that can carry out logical operations and complete tasks.

These miniscule machines look nothing like laptops or Roombas. Yet, algorithms still guide the robots through tasks, and the biological computers funnel inputs through logic gates. While a standard circuit works with electrical currents, though, the inputs in the biological version are biochemical signals triggered by presence of a protein or pathogen. The outputs, in turn, are another set of biochemical signals that trigger cellular responses, such as the activation of a gene. 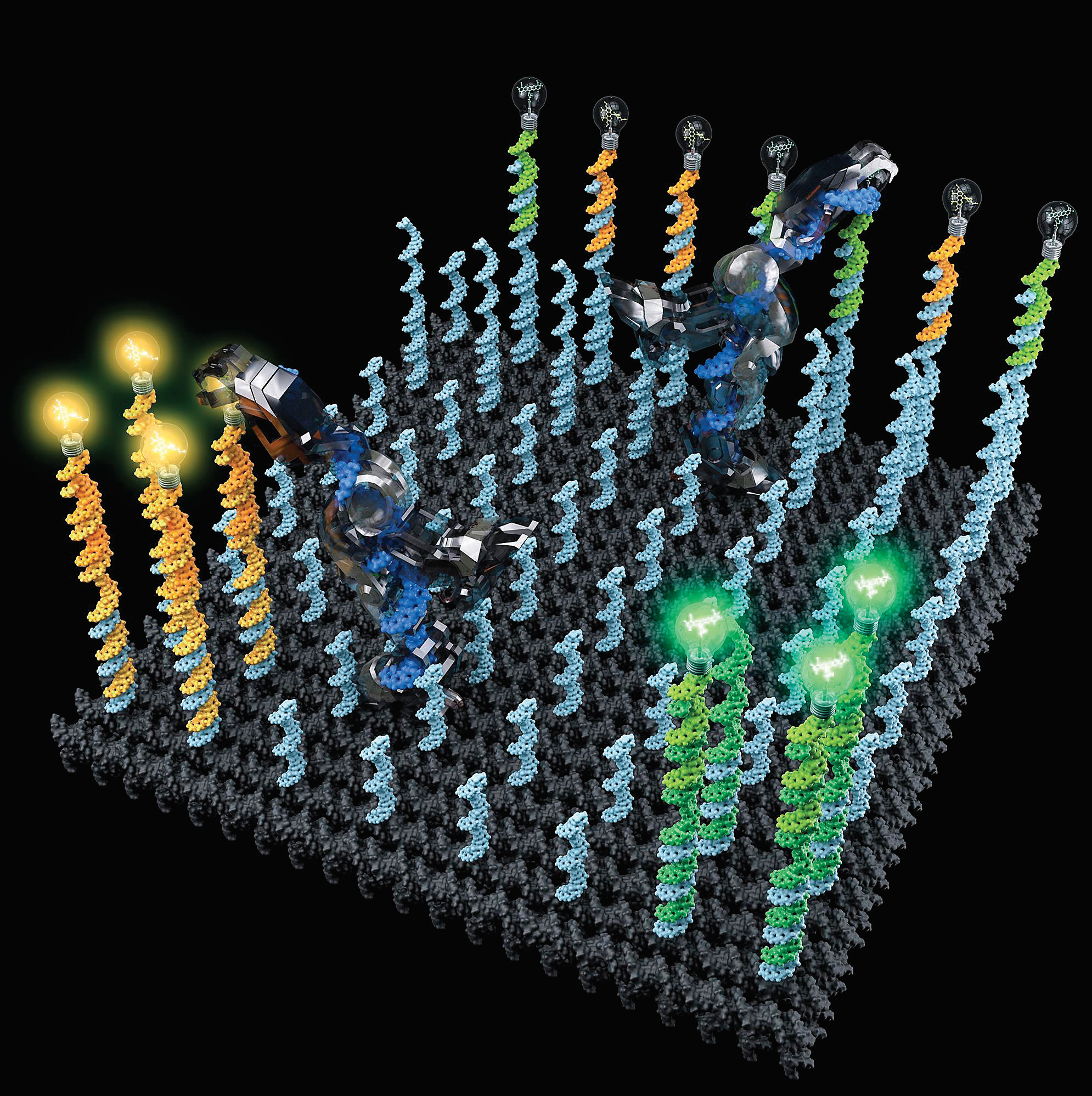 The potential applications vary widely, ranging from reprogramming immune cells to fight infections without inducing harmful side-effects, to triggering molecular robots in trash to accelerate decomposition. However, scientists caution that biological computers and robots are still in their early stages of development, in part because the cellular environment is such a challenging space. "You really need to be an engineer to design them correctly," says Massachusetts Institute of Technology (MIT) synthetic biologist Christopher Voigt. "You have to understand the molecular biology, but you have to think like an engineer."

Computing Inside the Cell

While Voigt and many other scientists prefer to use DNA as the building blocks of their biological computers, Arizona State University bioengineer Alexander Green and his colleagues at Harvard University's Wyss Institute for Biologically Inspired Engineering have been building RNA-based circuits. In their work, the design of the system is coded into DNA, which is then inserted into bacteria as a ring of DNA called a plasmid. From here, the cell takes over, essentially constructing the computer by transforming the DNA into what Green calls gate RNA.

These gate RNAs are folded in such a way that they only interact with the cell's ribosome to produce proteins when activated by additional strands. When one of these strands (the input) latches onto a gate RNA, the hybrid pair then instructs the ribosome to produce a glowing protein (the output).

"You really need to be an engineer to design [biological computers and robots] correctly. You have to understand molecular biology, but you have to think like an engineer."

Green refers to the system as a ribocomputer, and envisions multiple applications, including a future version that could be used to detect viruses even if they mutate rapidly. For example, if the gate RNA were programmed to respond to two different types of viral RNA (the inputs) associated with the Zika virus, and to trigger the ribosome to generate a glowing signal (the output) in the presence of one or the other, then the ribocomputer would be using the biological equivalent of an OR gate, since either one strand of viral RNA or the other would stimulate the output.

The most complex ribocomputer Green and his colleagues have devised so far can carry out 12 logic operations: five AND, five OR, and two NOT. In this case, a variety of RNA inputs can interact with the gate RNA. An AND operation is triggered when two complementary inputs are present, for example. Another set of RNA strands effectively prevents other inputs from interacting with the gate RNA, functioning as a NOT gate because it shuts down activity. "We have developed a very programmable way to use RNA to do simple computations in living cells," says Green. "We're basically enabling cells to make very logical decisions."

Scientists building biological robots are making difficult decisions of their own in determining how to construct molecular machines that move and manipulate objects. For example, chemist Peter Allen of the University of Idaho and colleagues Andrew Ellington of the University of Texas, Austin, and Cheulhee Jung of Korea University, first built a two-legged, DNA-based robot that could walk across a surface littered with strands of DNA.

Each of the robot's legs was designed to be complementary to these anchor pieces of DNAthe particular sequences of Adenine, Thymine, Cytosine, and Guanine molecules on each were selected to bind to each other. For the robot to move, its legs first had to latch onto neighboring strands. One would unbind and attach to another strand, then the next would follow. As each of the legs completed this action, releasing one strand and binding to a neighbor, the robot walked. The problem with this approach, Allen explains, is that both strands could abandon their grip at the same time. "There was a chance that both legs could detach and the walker could float away," Allen says.

This glitch prompted Allen's colleague, Jung, to devise a single-legged DNA walker. The scientists took microscopic plastic spheres and covered the surface with 10,000 strands of synthesized DNA. As with the previous scenario, the walker moved along the surface by latching onto these tiny strands of DNA, then transferring to the next one like a snake moving between tree branches. As the robot attached itself to each DNA strand, the bond triggered another reaction that caused a molecule to fluoresce. When the walker covered enough of the surface and interacted with enough of the DNA strands, its fluorescence was bright enough to be detected with a microscope.

Allen envisions building robots that lie dormant until they come into contact with certain molecules or pathogens, which then spur them to move and trigger the fluorescent signals. "You could put your DNA robots into a vial of blood and it would either light up or not," he says, "and you'd know if the pathogen was there or not."

Calling these machines 'robots' in their current form is slightly misleading, Allen concedes, but recent advances suggest they eventually will be able to complete the kind of tasks normally associated with large-scale robots; they just might not do so in the same way. For example, bioengineer Lulu Qian of the California Institute of Technology and her colleagues recently demonstrated a DNA robot capable of sorting cargo. Given such a task, a standard electromechanical robot would probably explore its space, pick up and attempt to recognize each item, deposit an item in the right place, and then search for the next one. "Obviously, it would be very hard to program all that 'intelligence' into a single molecule," Qian explains.

So her group designed a robot that completed the sorting task by following a random walk algorithm, with which the robot does not remember where it has been or recognize the cargo. In the experiment, the DNA robot moved on a substrate covered with about 100 strands of DNA, dubbed pegs. The cargo items, fluorescent molecules, were linked to different pegs, and the robot's job was to find them, pick them up, and deliver them to the appropriate drop-off point.

The robot consisted of a leg with two feet (each a segment of a strand of DNA) and an arm with a hand. The segment of DNA on each foot was synthesized to latch itself to the DNA on the pegs. When one took hold, the other moved freely until it grabbed onto a neighboring strand of DNA; then the previous leg released and searched for its next mooring.

The robot's hand was designed to bind to strands of DNA attached to the fluorescent molecules, so when the robot bumped into a piece of cargo, it would grab the molecule and continue its random walk. Eventually, the robot would come across the drop-off point. Another segment of the cargo strand served as an identification tag, almost like a Universal Product Code. The drop-off point recognized that segment, latched on, and took the cargo strand and the fluorescent molecule attached to it. The robot then continued its random walk.

The entire experiment, which involved sorting six cargo items, required 300 steps and 24 hours, so the work is not exactly designed for holiday fulfillment operations in an Amazon warehouse. Yet Qian says there are several important, transferrable lessons coming from the experiment. The first is that complex tasks, like cargo sorting, can be accomplished with simple algorithms. "The simpler the algorithm," she notes, "the more likely it can be carried out by simple molecules."

The other key demonstration is the importance of modularity in building these robots. Before the current experiment, Qian's group demonstrated the viability of the walking robot using only one leg and two feet. "We then showed that adding an arm and a hand segment, without any changes to the leg and foot segments, allowed the robot to pick up and drop off cargos while moving around in random directions," she explains. "This proof-of-concept demonstration opens up future possibilities for developing additional building blocks that can be added to the toolbox of DNA robots."

Eventually, that expanding toolbox could be used to develop new applications. While the scientists are hesitant to go into too much detail about these applications, given the early stages of the research, Allen observes that the potential is tremendous: "The idea of being able to assemble matter at the atomic or molecular level and have control over it at a rational level, that's extremely appealing."

Gregory Mone is a Boston-based science writer and the co-author, with Bill Nye, of Jack and the Geniuses: At the Bottom of the World.