How the Internet Spans the Globe

Undersea cables are responsible for moving data between countries and continents at high speeds, making everything from photo sharing to financial transactions possible. These cables use fiber optics to move data at high speeds to land, where the data is then conveyed via fiber optics to homes and businesses.

Yet, despite the billions of people relying on the data moved by undersea cables, there are only about 380 of them worldwide as of 2019, according to CNN estimates, though they span more than 745,000 milesor more than three times the distance to the moon.

Given the sheer scope of undersea cables, which often span entire oceans, The New York Times estimates an individual undersea cable project can cost up to $350 million. That is why these cables have historically been laid by global telecommunications firms with the deep pockets and technical expertise necessary to undertake these projects. However, tech companies are increasingly dominating both the use and implementation of undersea cables.

"Some of the main investors in new cables now are Google and Facebook," says Alan Maudlin, research director at TeleGeography, a telecommunications research firm, because tech giants are increasingly the ones using all that undersea bandwidth.

When it comes to global bandwidth usage, just a handful of services account for more than a third of all bandwidth, according to research from network intelligence company Sandvine. The company's Global Intenet Phenomena Report identifies Web-based media streaming, Netflix, and YouTube as the top three users of global traffic, comprising 34.1% of traffic as of September 2019. Facebook is also in the top 10. 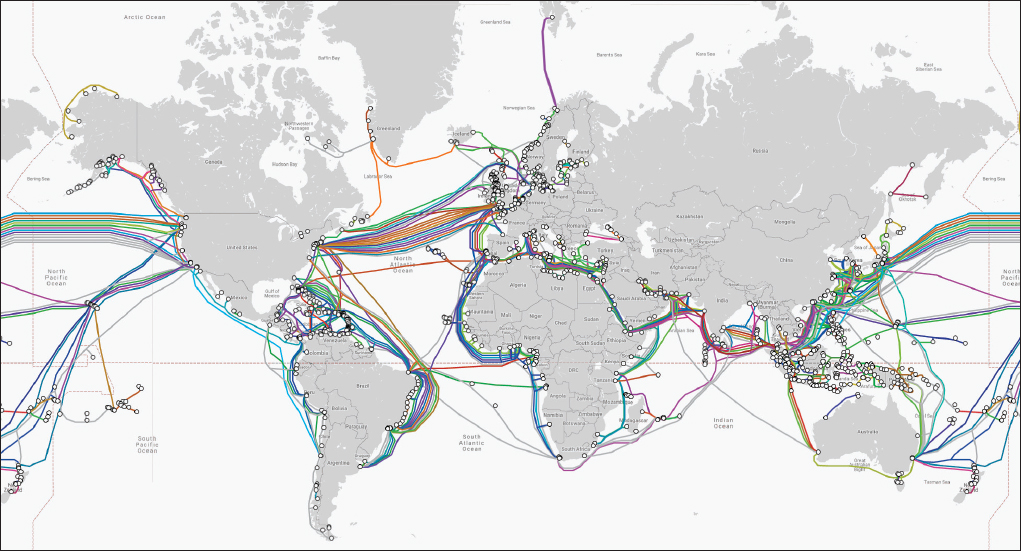 Figure. There are more than 745,000 miles of submarine cables supporting the billions of people who rely on the Internet.

One of the fastest undersea cables in operation today is the Marea cable, partially owned by Microsoft, Amazon, and Facebook. It transmits data at 160 terabits per second, which is "16 million times faster than the average home Internet connection," says Microsoft. The Marea cable has enough capacity to "stream 71 million high-definition videos simultaneously," according to the company.

Despite this ongoing change in cable dominance, undersea cables often force traditional telecoms and the new guard of tech giants to play nice.

The Marea cable is the result of a partnership between Microsoft, Facebook, Amazon, and Telxius, a spinoff that manages telecom infrastructure for multinational telecom Telefonica. That is because advanced cables like Marea are critical to meeting rising demand from the consumers and businesses both telecoms and tech giants serve.

"Marea comes at a critical time," says Microsoft president Brad Smith. "Submarine cables in the Atlantic already carry 55% more data than transpacific routes, and 40% more data than between the U.S. and Latin America." Smith says there is "no question" demand for transAtlantic data flows will increase.

"Only Google has built/funded cables themselves, but even these cables are used by other parties besides Google," says Maudlin. "For example, the new Dunant cable [owned by Google] between the U.S. and France will have a fiber pair used by the French carrier Orange."

Tech giants may battle each other for Internet dominance, all while replacing old guard telecoms, but when it comes to laying undersea cable, playing nice seems to be the order of the day.

Companies may collaborate to build undersea cable networks, but they still must defend these networks from threats. Damage to a single cable can cause widespread disruption. In fact, the potential for cable outages was actually the reason Microsoft helped to create the super-fast Marea cable.

In 2012, Hurricane Sandy (also known as Superstorm Sandy) hit the east coast of the U.S., inflicting nearly $70 billion in damage to the infrastructure of New York and New Jersey. In addition to the homes and businesses damaged, the storm also damaged the places where undersea cables came ashore, causing service disruptions. Microsoft learned the hard way that New York and New Jersey were home to an unnaturally high convergence of undersea cables making landfall.

That made Microsoft think differently about potential dangers to undersea cables, both below the surface and on land. Today, the Marea cable makes landfall in the U.S. much further south, in Virginia Beach, VA, to avoid disruption if New York or New Jersey ever get hit by a storm of Sandy's magnitude again.

Being more strategic about where cables make landfall certainly helps. So does building the cables to withstand physical damage and destruction. The fiber optics of undersea cables are wrapped in protective material to withstand harsh underwater environments, natural disasters like submarine earthquakes, and man-made damage from fishing boats and anchors.

The number of undersea cables being laid is increasing to meet demand, but each cable still requires multiple years and millions of dollars to lay.

Typically, "the fibers are wrapped in urethane and wrapped in copper and wrapped again in urethane," said Byron Clatterbuck, CEO of international telecom company Seacom. The urethane protects the optical fibers, and the copper conducts electricity that powers repeaters designed to regenerate the signal regularly through the cable. Depending on the environment, cables may also be sheathed in extra protective material, such as iron or steel.

The number of undersea cables being laid is increasing to meet demand, but cables still take years and millions of dollars to lay, which puts a ceiling on how many companies can lay cable at a time to expand global bandwidth. That fact has companies exploring ways to get more out of each cable laid.

"One key development is space-division multiplexing," says Maudlin. "It's basically a method to increase the number of [spatially distinct] channels that can be put in a single fiber. Google is using this in their new Dunant cable between France and the U.S."

Dunant, which Google says is scheduled to go live this year, will use space-division multiplexing to provide transmission capacity of 250 terabits of data per second. The search giant says that is enough bandwidth to "transmit the entire digitized Library of Congress three times every second."

In the case of Dunant, which Google is building in tandem with telecom SubCom LLC, the companies are using an approach to space-division multiplexing in which the cable doubles the fiber pairs used from six pairs to 12. The power transmitted across the original six pairs would now be split, resulting in a "two-thirds capacity increase," according to Georg Mohs, CTO of SubCom LLC.

The technologies incorporated into newer cables like Dunant will make older cables look like dinosaursand cause them to go extinct.

However, older cables do not always make it to a peaceful retirement. Natural and man-made events can damage or destroy undersea cables.

"Cables routinely have faults all over the world each week," says Maudlin. He cites some of the primary causes of damage as fishing and anchors. Underwater earthquakes and landslides also can destroy or disrupt undersea cables, he says.

Cable disruption also can affect military operations, as occurred in 2008, when three of the world's largest undersea cables, in the Mediterranean Sea, were severed by accident. The incident was described in a report by U.K. think tank Policy Exchange that observed, "In a matter of hours, disruptions to regional connectivity had knocked out 80% of the connectivity between Europe and the Middle East," including communications for American and British military forces in Iraq that were enabled by these cables.

That incident suggests another potential danger to undersea cables: intentional sabotage. Coordinated cable destruction, notes Policy Exchange, could cause major disruptions that target specific nations. For example, cutting just three cables would cause India to lose 70% of its data traffic with Europe. "Cables are not only easily cut, but maps providing the exact locations of all the world's commercial cabling are freely available in the public domain."

In mid-2019, a fire broke out on a Russian AS-12 nuclear-powered submarine, killing 14 sailors. It was a tragedy, to be sure. However, the incident also put U.S. officials on edge; they claimed the submarine's real mission before the fire broke out was to cut undersea cables to disrupt or intercept communications.

According to the BBC, the television channel of Russia's defense ministry confirmed the country could both cut undersea cables and scan their data, back in 2015. Somewhat discomfortingly, the channel said, "Such an attack on underwater communications is possible only in the event of active hostilities."

One thing is certain. In wartime and peacetime, the undersea cables that power the Internet are too big to fail.

Satariano, A.
How the Internet Travels Across the Oceans, The New York Times, March 10, 2019, https://nyti.ms/33JVOKC