Dark Patterns: Past, Present, and Future

Dark patterns are user interfaces that benefit an online service by leading users into making decisions they might not otherwise make. Some dark patterns deceive users while others covertly manipulate or coerce them into choices that are not in their best interests. A few egregious examples have led to public backlash recently: TurboTax hid its U.S. government-mandated free tax-file program for low-income users on its website to get them to use its paid program;9 Facebook asked users to enter phone numbers for two-factor authentication but then used those numbers to serve targeted ads;31 Match.com knowingly let scammers generate fake messages of interest in its online dating app to get users to sign up for its paid service.13 Many dark patterns have been adopted on a large scale across the Web. Figure 1 shows a deceptive countdown timer dark pattern on JustFab. The advertised offer remains valid even after the timer expires. This pattern is a common tactic—a recent study found such deceptive countdown timers on 140 shopping websites.20 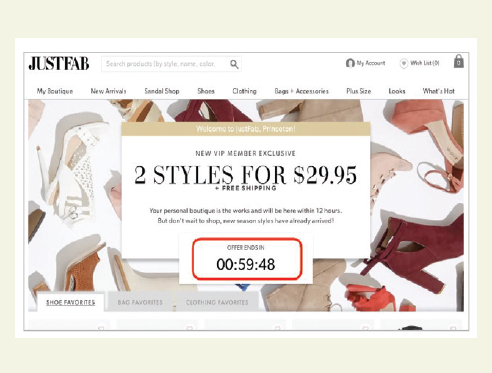 The research community has taken note. Recent efforts have catalogued dozens of problematic patterns such as nagging the user, obstructing the flow of a task, and setting privacy-intrusive defaults,1,18 building on an early effort by Harry Brignull (darkpatterns.org). Researchers have also explained how dark patterns operate by exploiting cognitive biases4,20,33 uncovered dark patterns on more than 1,200 shopping websites,20 shown that more than 95% of the popular Android apps contain dark patterns,8 and provided preliminary evidence that dark patterns are indeed effective at manipulating user behavior.19,30