Trapped ions (TIs) are a leading candidate for building Noisy Intermediate-Scale Quantum (NISQ) hardware. TI qubits have fundamental advantages over other technologies, featuring high qubit quality, coherence time, and qubit connectivity. However, current TI systems are small in size and typically use a single trap architecture, which has fundamental scalability limitations. To progress toward the next major milestone of 50–100 qubit TI devices, a modular architecture termed the Quantum Charge Coupled Device (QCCD) has been proposed. In a QCCD-based TI device, small traps are connected through ion shuttling. While the basic hardware components for such devices have been demonstrated, building a 50–100 qubit system is challenging because of a wide range of design possibilities for trap sizing, communication topology, and gate implementations and the need to match diverse application resource requirements.

Toward realizing QCCD-based TI systems with 50–100 qubits, we perform an extensive application-driven architectural study evaluating the key design choices of trap sizing, communication topology, and operation implementation methods. To enable our study, we built a design toolflow, which takes a QCCD architecture's parameters as input, along with a set of applications and realistic hardware performance models. Our toolflow maps the applications onto the target device and simulates their execution to compute metrics such as application run time, reliability, and device noise rates. Using six applications and several hardware design points, we show that trap sizing and communication topology choices can impact application reliability by up to three orders of magnitude. Microarchitectural gate implementation choices influence reliability by another order of magnitude. From these studies, we provide concrete recommendations to tune these choices to achieve highly reliable and performant application executions. With industry and academic efforts underway to build TI devices with 50-100 qubits, our insights have the potential to influence QC hardware in the near future and accelerate the progress toward practical QC systems.

Trapped ions (TIs) are one of the leading candidates for building qubits (short for quantum bits). Figure 1 shows an example system, where ions are isolated and trapped using an electromagnetic held. To enable computations, the internal atomic states of the ions are used to represent the 0 and 1 basis states for a qubit and laser control pulses are used to implement gates (instructions). Industry vendors such as IonQ and Honeywell, along with nearly a hundred academic groups worldwide, are working to build quantum computing (QC) systems using this technology. To date, the largest TI systems have up to 32 qubits (IonQ) and have been used for both demonstrating promising near-term QC applications and, recently, a milestone demonstration of quantum error correction.5 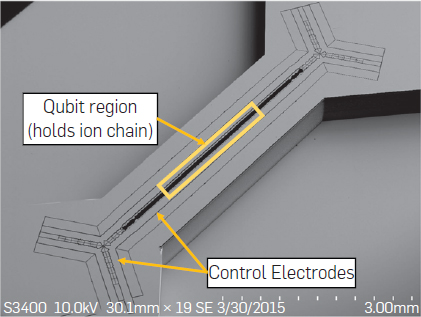 Figure 1. Scanning electron micrograph of the HOA-2 trap designed and fabricated at Sandia National Laboratories. Figure adapted with permission from Maunz.15 A single trap houses all the ions. Control electrodes are used to load, remove, and move ions. This architecture does not scale beyond 50–100 qubits because of gate implementation challenges in long ion chains.

To demonstrate quantum advantage over classical computing, QC systems with 50–100 qubits are required. However, most current TI devices have a fundamental architectural scaling bottleneck: they are based on an architecture where all the ions are contained within the same trapping zone. In this single-trap architecture, ion spacing and ion–ion interaction strength reduce as more ions are added to the trap. Hence, with increasing number of qubits, qubit control and gate implementation become increasingly unreliable and time consuming.