In March, the U.S. National Aeronautics and Space Administration (NASA) announced that its planned Orion spacecraft, which could one day carry astronauts to the Moon and Mars, will include a new kind of communication system. Typically, manned and unmanned vehicles and probes use radio waves to send and receive information. For decades, though, scientists have been pushing toward using laser-based communications in space. Lasers are no faster, but they can deliver far more information than radio waves in the same amount of time. NASA's Apollo missions to the Moon were capable of transmitting 51kb worth of data per second, for example, but Orion's planned Laser-Enhanced Mission and Navigation Operational Services (LEMNOS) system could send back more than 80 megabytes each second from the lunar surface.

That stream could be packed with rich scientific data, or it could include ultra-high-resolution video of distant worlds. Scaled-up versions of this system could dispatch movies of dust devils, storms, or even astronauts walking on the surface of Mars. During the six-month-long trip to the Red Planet, space travelers could potentially trade videos with family members back on Earth, and mitigate the psychological toll of the long journey.

The LEMNOS project is just one of many planned or existing laser-based communications systems in orbit and beyond.

These recent and anticipated advances cannot be attributed to a single, revolutionary breakthrough, according to experts. Instead, this new age of laser-based broadband in space has resulted from steady improvements in detectors, actuators, control systems, and more.

The idea of laser communications in space has been around nearly since the invention of the laser itself, notes Abi Biswas, supervisor of the Optical Communications Systems group at NASA's Jet Propulsion Laboratory in Pasadena, CA. From a basic physics standpoint, Biswas says the advantage is clear: lasers occupy the higher-frequency end of the electromagnetic spectrum, relative to radio waves. That means the beam itself is much narrower. If you were to aim a beam of radio waves back at Earth from Mars, the beam would spread out so much that the footprint would be much larger than the size of our planet. "If you did the same thing with a laser," Biswas says, "the beam footprint would be about the size of California." 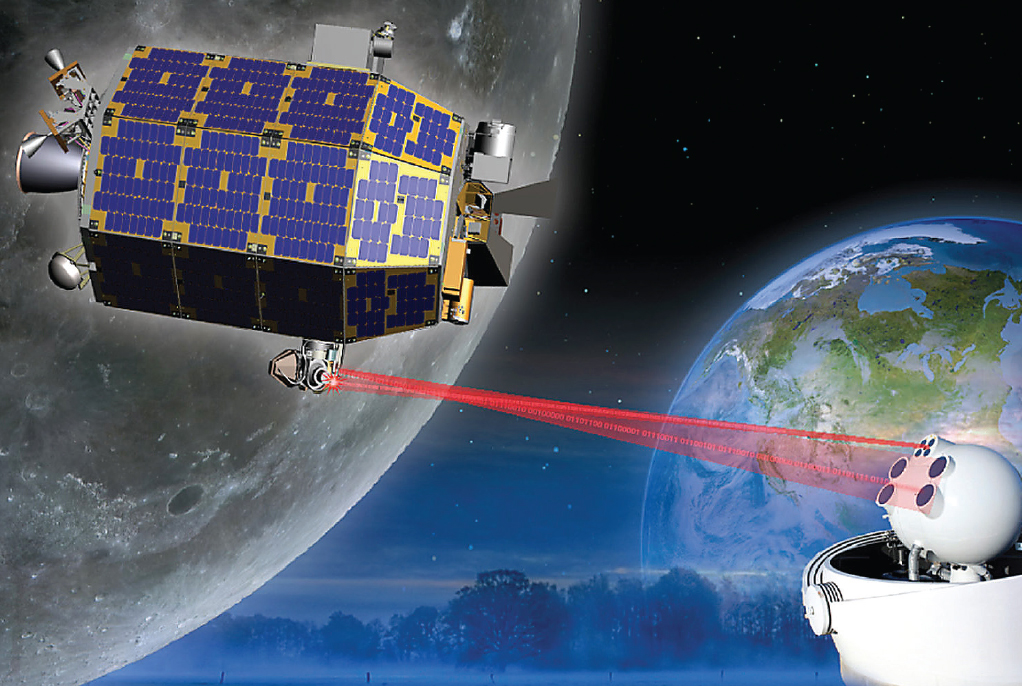 Figure. Artist's conception of how a NASA spacecraft would use lasers to communicate with Earth.

The advantages are not limited to solar system exploration; they can be applied within Earth's orbit as well. The European Space Agency (ESA) and Airbus recently put lasers to work as a broadband data transfer technology, the European Data Relay System (EDRS).

Normally, a satellite flying in low Earth orbit transmits data only when it is within view of a ground station. As a result, it may take 90 minutes for the ground station to receive data after it has been collected.

In the EDRS system, lasers are used both to send more data and to accelerate its transfer. A geostationary satellite locks onto the low-orbiting satellite via laser the moment it passes over the horizon, then remains connected as the craft soars over the hemisphere below. The observing satellite begins transmitting data via laser once the link is established. The satellite can transfer far more data this way, but it also gets that data to the ground faster. Instead of waiting for the observing satellite to fly within view of the ground station, the laser transfer begins once the craft establishes line of sight with the geostationary craft, which then transmits data to the ground via radio. "You cut down the time or delivery of the data to the end user on the ground from hours to 10 to 20 minutes," says Michael Witting, program manager for ESA EDRS.

This speed, combined with the ability to transmit more high-resolution satellite images, will allow organizations to track the movement of ice in polar regions to help ships navigate the Arctic crossing. Officials could monitor oil spills, earthquakes, floods, and other instances in which information needs to travel quickly to disaster response teams.

The EDRS is already in use, and ESA is scheduled to launch a second satellite in 2018.

NASA has a similar project in the works, and while the link does not extend all the way to the Moon or Mars, Witting says the technical challenges were significant. The system operates over approximately 45,000 kilometers (about 28,000 miles), and each laser terminal must locate and remain locked on the other throughout flight. "It's like taking a torch from Europe and hitting a coin in New York," Witting says all while the coin is racing at about 17,000 miles per hour.

Lasers from the Moon

As you move out to larger distances, such as the Moon or Mars, the challenge increases. Biswas compares the effort involved with hitting a target on Earth from the Moon or Mars to trying to look at a small object through a one-meter-long straw; holding that straw steady enough to keep it focused is a tremendous challenge. If not held steady and aimed accurately, the California-sized footprint of a laser beam traveling from Mars could actually miss its target on Earth, and fail to transmit the data.

Experts say the success of NASA's 2013 test of such a system, the Lunar Laser Communication Demonstration (LLCD), can be attributed to a number of advances, including improvements in the actuators that make micro-adjustments to the position of the beam, ensuring it remains on target, and advances in the control systems that determine exactly where it needs to aim. When the laser struck Earth, the beam was six kilometers wide, but the receiver was less than one meter wide. One way around this would be to build a larger receiving antenna, but the goal of the LLCD was to show that an optical communication system could work without a massiveand massively expensivedish on the ground. "You have to figure out, how can I catch this dancing signal onto a very sensitive detector and then add very little noise?" asks Don Boroson, a research fellow in the Massachusetts Institute of Technology (MIT) Lincoln Laboratory's Communication Systems Division, and a major contributor to the LLCD.

For the Moon demonstration, Boroson says the group used an old idea known as error correction coding, which intelligently bundles in redundant bits, so you can still decipher an entire message even if you only catch part of the beam. So, if they were trying to send a message that was 10,000 bits, they'd add in another 10,000 carefully chosen redundant bits, and send 20,000 in all. Then, even if only half of that message was received, the original 10,000-bit code could still be deciphered. This approach was critical, Boroson explains; "it allowed us to have as small as possible a receiver on the ground and still do these very high data rates and make no errors. We did the lunar link with half a watt and a four-inch telescope in space, and we still did 622 megabits per second to the ground."

Pushing beyond satellite or lunar communication increases the technical difficulty, because the laser beam loses energy at a rate proportional to the square of the distance between transmitter and receiver. Scaling up the power used to generate the laser is not an option, Biswas explains, because the laser systems would become too large and expensive. "As you get farther and farther away, you have to improve the efficiency of your system," says Biswas. "You have to make every photon count."

Despite the challenges of larger distances, physicist Philip Lubin of the University of California, Santa Barbara, argues that lasers would still be a preferred means of communication for missions to the edges of our solar system and beyond. Lubin has been working on a project to propel miniature spacecraft beyond the solar system using a phased array of either ground- or space-based lasers. The spacecraft would have a modest laser to send back data, and Lubin says the array used to propel the craft could also be engineered to receive its messages. "If we're setting up to blast something out with lasers, then why not use that system to send something back?" he asks. That something probably will not include video, but the lasers could dispatch images and other information.

Back on Earth, larger receiving telescopes would help pick up signals from the Moon, Mars, or beyond. Currently, NASA scientists are demonstrating how laser communications systems work with small receivers, but with the kind of ground telescopes that measured 10 to 15 meters across, it would be possible to catch far more light and information. Boroson doesn't expect those receivers to be built anytime soon, but he does anticipate laser communications will be used more and more.

"It's going to happen slowly," says Boroson. "First we'll see lots of systems around the Earth, then a few systems further out in space, and then more and more. But it's all coming, it's definitely coming."

Gregory Mone is a Boston-based science writer and the author, with Bill Nye, of Jack and the Geniuses: At the Bottom of the World.