Picking out the differences between high-end whiskeys might be easy for a seasoned Scotch drinker, but until recently, this skill eluded artificial systems. Now researchers at the University of Glasgow have developed an artificial tongue capable of distinguishing between drams of Glen-fiddich, Glen Marnoch, and Laphroaig whiskeys with 99% accuracy.

The "tongue" itself consists of tiny gold receptors that measure just 100 nanometers across, or approximately one-thousandth the width of a human hair. These bits of gold, which exhibit unusual optical properties at the nanoscale, function as artificial taste buds. When exposed to a liquid, the receptors change color. The researchers measure and track the changes across multiple receptors, then build up a statistical model of a given liquid's attributes.

Overall, the system works as a human tongue does, according to University of Glasgow biomedical engineer Alasdair Clark, the lead researcher on the project. "If we humans are given a beverage, we can tell if it's whiskey or water, but we couldn't tell you the chemicals inside," Clark notes. "The artificial tongue works in a similar way. It can't tell you about the chemicals, but you can train it to recognize particular beverages."

Scientists have been working to develop artificial tasting systems and electronic noses since the late 1980s, but those initial efforts were stalled by technological shortcomings and a lack of understanding of the physiology and information processing behind taste and smell.

Today, that situation has changed.

"We have a lot more detailed information about how the biological systems behind taste and smell work now," says biochemical engineer Krishna Persaud of the U.K.'s University of Manchester. "The technology has also improved, in terms of computing, electronics, and pattern recognition. This has allowed much more powerful instruments to be developed." 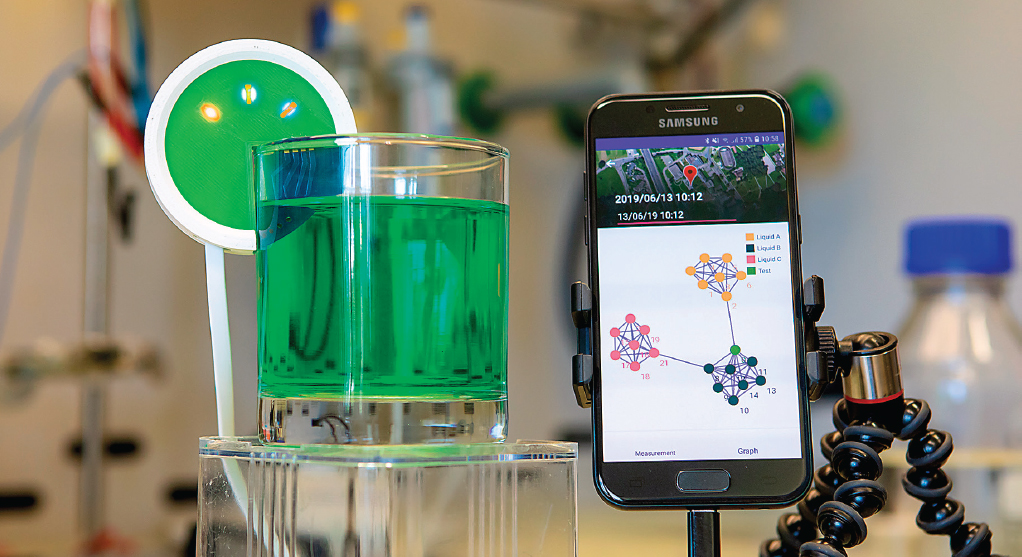 Figure. The smartphone displays the results of Hypertaste, an AI-assisted "tongue" app from IBM Research that uses electrochemical sensors to analyze complex liquids.

The Complexity of Taste and Smell

By the early 1990s, researchers had realized that smell and taste would not be as easy to replicate as vision or hearing. "It's very easy to define what we're measuring with vision or audio, but for smell that is highly, highly complex," says physicist Jan Mitrovics of JLM Innovations, a German e-nose technology company. "We can build cameras that see much better than a human, but when it comes to smell, to odor, that's not really possible."

The human olfactory system relies on approximately 400 different types of smell receptors. A given chemical might activate roughly 10% of these receptors in the nose, and our brains then process this information to identify a particular smell. "If you think of a biological nose, what you have are lots of sensors which can detect chemicals, but they're not very selective," says Persaud. "When you sniff an odor, which very often contains hundreds of compounds, you are producing patterns of signals, and that pattern of information is then interpreted by your brain as the odor of an apple, coffee, or a flower."

While mimicking this approach in artificial systems remains a challenge today, the ability to share training data and machine learning models has led to advances, according to materials scientist Patrick Ruch of IBM Research – Zurich. Ruch and his group recently developed Hypertaste, an artificial tongue that works like human taste and smell. Hypertaste consists of an array of polymers deposited on electrode pads. Different liquids will activate different polymers, generating unique voltages. By measuring and recording the voltage patterns, Hypertaste compiles a kind of digital fingerprint of a liquid.

"A sommelier would taste a lot of different wine samples to estimate different types of taste and sensory attributes," Ruch explains. "In a similar way, we have to train an electronic tongue before it gives us useful information. We can train it to recognize different liquids by associating digital fingerprints with these liquids."

Hypertaste is sensitive enough to distinguish between mineral waters from different regions with an accuracy of up to 97%. The system, packaged into a small device that can be clipped to the edge of a glass, relays data to a mobile app, which transfers the data to the cloud, where it is fed into a machine learning model. This allows Hypertaste to be used on liquids it has not been exposed to before. "Within a second, you get a reply back from the model that calculates a confidence score," Ruch says, "and based on that, it tells you the class of liquids in the training database most similar to the tested one."

At JLM Innovations, Mitrovics and his team develop similar technologies focused on smell, including the SniffPhone, a European Union-funded project that involved multiple institutions and could yield a non-invasive medical diagnostics tool. When a patient breathes into the handheld Sniff-Phone, an array of sensors captures a pattern of the person's breath. The information is transferred to a cloud server for processing, and the results are presented to a doctor.

Mitrovics has been involved in artificial smell since the early 1990s, and he says such capabilities were not possible until recently. "The sensor technology has evolved and become cheaper, more reliable, and much smaller," he notes. "We can build small intelligent devices that use artificial intelligence and pattern recognition, and that has led to many developing applications."

A World of Applications

The medical diagnostics potential of smell has been recognized for a while—dogs can alert diabetics when their blood sugar or insulin levels drop too low—but there are other commercial applications as well. The same holds for artificial taste. The tongue developed by Clark and his team could be used to identify counterfeit whiskey, for instance.

Similarly, an artificial taste and smell system developed by the Aromyx Corporation of Mountain View, CA, is being tested for quality-control applications. One Aromyx customer buys large volumes of fruit juice. Occasionally the juice spoils, and the company needs to know as quickly as possible. Today, the company identifies spoilage using human testers, but Aromyx is testing a more quantifiable alternative. Aromyx develops biosensors modeled after the actual receptors used in human taste and smell. In this case, Aromyx identified an olfactory receptor that responds to spoiled juice, and reproduced the receptor in its artificial system to pick out the signal. "It takes all that human subjectivity out of it and they can measure directly how much of that bad flavor is present," says Aromyx CEO Josh Silverman.

Artificial noses could be used to sense changes in environmental conditions indoors, and prompt people to open windows. They could more precisely measure the olfactory properties of coffee to ensure large companies maintain a consistent flavor profile in their beans. The potential applications are numerous, but at least one significant hurdle remains before these systems can approach the power of human taste and smell.

In his company's case, that means testing medical diagnostic applications with more patients. Clark's artificial tongue would benefit from more data, too. If it were exposed to thousands of samples, then trained on a machine learning model, Clark predicts his artificial tongue could identify the characteristics of liquids it had never been exposed to previously.

Scientists involved with an IBM project focused on applying artificial intelligence to olfaction recently did exactly that. IBM Research team leader and geneticist Pablo Meyer was able to work with a dataset consisting of ratings from 49 people who ranked and categorized the olfactory characteristics of 500 different molecules using 21 simple words, such as flowery, sweet, and sour. Based on these results, his group then trained a machine learning algorithm using the physical characteristics of the molecules being smelled, and this model was able to accurately predict their smell ratings. Their system can look at a molecule and predict its olfactory characteristics. "The breakthrough is that for the first time we could really predict words that would describe a molecule," Meyer explains. "We can predict what something is going to smell like."

This was all possible, Meyer says, because of the quality of the data. "What has advanced the field is that we were able to find a new dataset," he notes. "A large single dataset can be that good."

The next challenge will be compiling more of these datasets, which is no small hurdle given the subjectivity of taste and smell. "It's not like you're taking a picture with a smartphone camera or a professional camera; those pictures all look the same, so you can train from one to another," notes Ricardo Gutierrez-Osuna, a professor in the department of computer science and engineering of Texas A&M University. "With cameras, you have the primary colors: red, green, and blue. With smells, there are no known primary odors."

Still, researchers are encouraged by recent developments, and point to a bright future for these systems driven by continued improvements in sensors and computing, and increasing knowledge of how the biological analogues work. "The technology that is going to unlock the potential of these artificial tongues and noses is really just emerging," says Ruch.

Gregory Mone is a Boston-based science writer and the author, with Bill Nye, of the Jack and the Geniuses novels.