The lack of a rigorous mathematical foundation for electronics impelled engineer Leon Chua to develop one, which led to the formulation of the memristor — a theoretical fourth basic circuit element in addition to the resistor, capacitor, and inductor where electric charge and magnetic flux come together. Since then the creation of memristors has been achieved, and their novel abilities might unlock key insights about the human brain that would be a tremendous step forward for the field of artificial intelligence.

Advantages of memristors include rapid, nanosecond writing of data using a very small amount of energy, and retention of memristive memory even when the power is turned off. The most immediate potential application for memristors is as a flash memory replacement, while durability improvements should make memristors ideal for a superfast random access memory, says Hewlett-Packard (HP) Laboratories Fellow Stan Williams. 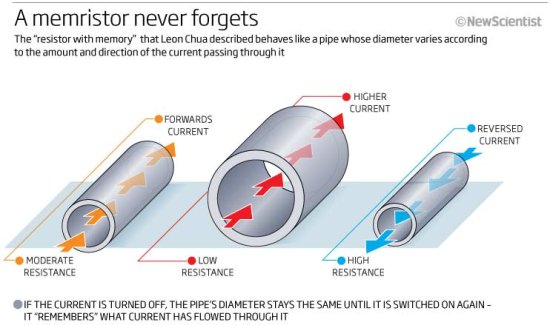 The discovery that a slime mold was behaving in the manner of a memristive circuit in that it could memorize a pattern of events without the aid of a neuron inspired a physicist at the University of California, San Diego to construct a circuit capable of learning and predicting future signals. Much earlier, Chua had noticed a sharp similarity between synapse behavior and memristor response, leading to speculation that memristors might help engineer an electronic intelligence that can mimic the power of a brain.

The U.S. Defense Advanced Research Projects Agency has embarked on a project to create "electronic neuromorphic machine technology that is scalable to biological levels." HP's Greg Snider has envisioned the field of cortical computing that focuses on the potential of memristors to imitate the interaction of the brain's neurons. He and Williams are working with Boston University scientists to devise hybrid transistor-memristor chips that aim to replicate some of the brain's thought processes.